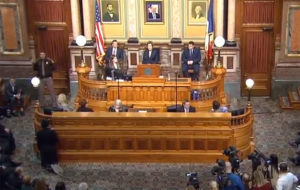 Governor Reynolds giving her Condition of the State address.

“Opportunity Lives Here” is the title of the annual “Condition of the State” message Governor Kim Reynolds is delivering this morning at the statehouse and she’s asking legislators to raise one tax and lower others.

Governor Kim Reynolds declared the condition of the state “truly strong,” but she cautioned lawmakers not to take that for granted and urged them to make plans for what Iowa can be for the next generation. “No single policy will do,” Reynolds said, “but that kind of planning also takes a bold vision – a vision that preserves our heritage while seizing our opportunities.”

Reynolds used the speech to unveil what she’s calling the “Invest in Iowa Act.” By raising the state sales tax by one percent, Reynolds said the state can significantly cut income taxes across-the-board by 10 percent for all taxpayers and by 25 percent for low-income Iowans.

“I have no interest in raising taxes, so any increase in revenue from a sales tax must be more than offset by additional tax cuts,” Reynolds said. “That starts with continuing to reduce our uncompetitive income-tax rates.”

Reynolds is also proposing a reduction in county property taxes. Today, counties use property taxes to pay for mental health services. Reynolds proposes having the state pick up 70% of those costs — using money from the sales tax hike.

“By establishing a dedicated and stable fund for mental health, we will give hope to so many who are suffering in silence,” Reynolds said. “It’s a promise we’ve made, and it’s a promise I intend to keep.”

Another fraction of the new sales tax money would be deposited in a state fund for water quality and outdoor recreation programs.

“These changes will make our vision a reality. It’s an investment in our future. And it’s an investment in those who are our future,” Reynolds said. “…If we take this bold step, right now, then whoever is standing at this podium in 10, 20, or 30 years–Republican or Democrat–can proudly say what I can say today: The condition of our State is strong.”

Part of her plan is to change a state law, so more of the new sales tax money is spent on improving water quality rather than on outdoor recreation projects, like bike trails.

“We were given this beautiful land to work but also to keep,” Reynolds said, “and preserving what we’ve been given must be a responsibility of all Iowans.”

Reynolds has released a state budget plan as well. The governor proposes a 2.5% increase in general state aid for public K-through-12 schools. In her speech, Reynolds mentioned her request for an additional $20 million for flood relief.

“In 2019 we saw the resilience of Iowans tested once again as historic floods ravaged both sides of our state and parts in between,” she said. “Entire communities were wiped out as the waters rose and didn’t seem to recede.”

“Your state stands with you as we work to return life to normal and get your homes, businesses, and communities back on track,” she said.

Governor Reynolds is calling for changes in Iowa’s licensing system for plumbers, accountants and other professionals, people with another state’s license do not have to go through the lengthy and expensive process of getting a license to practice in Iowa.