You are here: Home / News / Legislators not ready to embrace governor’s Invest in Iowa Act 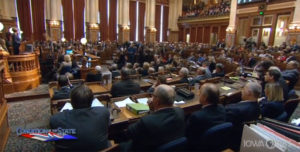 Legislators listen to the Condition of the State address.

During the governor’s annual “Condition of the State” message, Reynolds proposed a one percent hike in the state sales tax, along with a reduction in state income taxes, as well as a move to try to reduce county property taxes. House Speaker Pat Grassley, a Republican from New Hartford, said he doesn’t yet know if there’s a will among his GOP colleagues to embrace all the concepts Reynolds outlined.

“The governor laid out a plan. Obviously we’re Republicans, we want to be supportive of our governor and a lot of those issues she touched on are important issues (for Republicans),” Grassley said shortly after Reynolds’ speech, “but we need to see the details as we work through them.”

“We’ll have to see what the numbers are when they come back,” Schneider said. “I think it’s a good starting point for us to look at how we can reduce our income tax rates and make our state more competitive.”

Democrats like Senate Minority Leader Janet Petersen of Des Moines are wary of the governor’s call to shift how state funding for water quality projects is allocated.

“I think Iowans are really going to be interested in seeing how she’s changed up the formula that they supported 10 years ago and see that it’s actually going to clean up the water and not lift up polluters,” Petersen said.

Petersen said there’s also no permanent funding source in the governor’s plan to ensure the state pays a greater share for mental health services, as future lawmakers could change the formula Reynolds proposed.