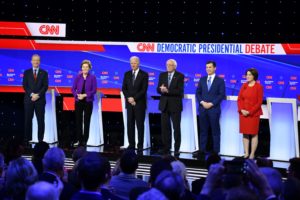 The final televised debate before the Iowa Caucuses showcased differences among six Democratic presidential candidates on health care and trade issues, along with a conversation about whether Americans will elect a woman as president.

At the start, the candidates fielded foreign policy questions. Vermont Senator Bernie Sanders and former Vice President Joe Biden squared off over their Iraq war votes in the U.S. Senate back in 2002. Biden said he’s long acknowledged his “yes” vote was a mistake.

“The man who also argued against that war, Barack Obama, also picked me to be his vice president…and asked me to end that war,” Biden said.

“Joe and I listened to what Dick Cheney and George Bush and Rumsfeld had to say,” Sanders said. “I thought they were lying.”

Former South Bend, Indiana Mayor Pete Buttigieg, a veteran, said he served in Iraq with soldiers who were barely old enough to remember those votes.\

“The next president is going to be confronted with national security challenges different in scope and in kind from anything we’ve seen before,” Buttigieg said, citing cyber security threats as well as climate change.

“I support the USMCA,” Klobuchar said. “I am glad that these improvements were made…on labor, on the environment and on pharma.”

“Ninety-five percent of the customers are out there, so we’d better figure out how we begin to write the rules of the road,” Biden said, “not China.”

The next few questions focused on a CNN report indicating Bernie Sanders told Elizabeth Warren in late 2018 — during a private meeting — that a woman couldn’t win the presidency.

“I don’t want to waste a whole lot of time on this ’cause this is what Donald Trump and maybe some in the media want,” Sanders said during the debate. “Anybody who knows me knows that it is incomprehensible that I would think that a woman could not be president of the United States.”

On Monday, Warren issued a statement asserting Sanders had made such a remark and she disagreed with it. She used debate time tonight to attack the issue “head on.”

“Can a woman beat Donald Trump? Look at the men on this stage. Collectively, they have lost 10 elections,” Warren said. “The only people on this stage who have won every single election they’ve been in are the women: Amy and me.”

The crowd erupted in cheers and applause as Klobuchar responded: “So true,” and added a few moments later her trademark “every where, every place, every time” about her election record.

California billionaire Tom Steyer used several of the questions directed his way to focus on his climate change message.

“I cannot allow this country to go down the path of climate destruction,” Steyer said.

The debate was broadcast on CNN, in partnership with The Des Moines Register and staged at Drake University.