You are here: Home / Human Interest / Food Bank of Iowa distributed a record amount in 2019 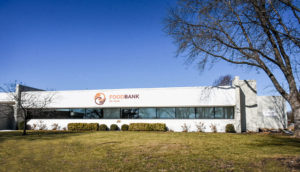 The Food Bank of Iowa reports it acquired and delivered more than 17 million pounds of food in 2019.

Spokesman Dylan Lampe says the total gives them a mixed feeling. “It was a 30 percent increase from the highest total we had had previously. We were pretty excited to report those numbers — but then again — we are still not meeting the need that’s out there,” Lampe says. He says a lot of hard work went into collecting, preparing and distributing the food to 55 counties.

He says that is well over one million pounds of food each month, “which is quite impressive.” Iowa continues to have one of the lowest unemployment rates in the country, but Lampe says that isn’t an indicator of how people are doing overall.

“The vast majority of the clients that use food pantries are working, some of them are working more than one job,” according to Lampe. “What we’ve seen is that wages have remained stagnant — and while unemployment is low — we haven’t really seen that affect the our need for services. For the last decade, food insecurity numbers have remained very steady around that ten percent range.” 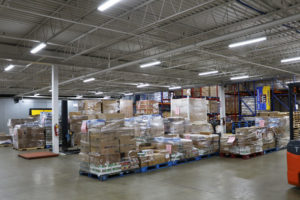 The distribution center of the Food Bank of Iowa.

He says it remains a challenge to pay for the trucks and fuel and all the things needed to supply the food. “Resources are always needed at organizations like ours in a variety of ways — whether it is food or funds. We always encourage folks to come and take a tour of the Food Bank of Iowa. Because once you see the vast operation that happens here and the really amazing work that our distribution center does on a day-to-day basis — it kind of changes the mindset of folks to give them a better understanding of how the whole process works.”

He says they have they have continued to look for sources of donated food, and one success has been the Food Rescue Program.
“Where retailers donate food that would traditionally go to the landfill that’s still nutritious, that’s still good. It’s just something that they want to pull from their shelves for a variety of reasons,” Lampe explains. “We’ve worked to create new partnerships that’s help us to recover more of that food — get it into the hands of those that need it. And also keeping it out of the landfill and doing our part from an environmental standpoint as well.”

Lampe says they can always use donations of food, money and volunteer time. You can find out more on their website: www.foodbankiowa.org