You are here: Home / Sports / Former Hawkeyes named to Hall of Fame 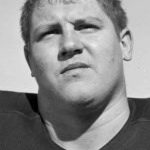 Former Iowa standouts Fred “Duke” Slater and Alex Karras have been named to the Pro Football Hall of Fame. Slater and Karras are members of the 2020 Centennial Class.

In his four seasons, Slater helped Iowa post a 23-6-1 record. Iowa had a perfect 7-0 Big Ten record in 1921 to claim the conference title, and was named by more than one media outlet as national champion.

Slater played 10 seasons of professional football. He was the first African-American lineman in NFL history and the only African-American to play in the NFL in 1927 and 1929. Slater was a six-time All-Pro.

During the NFL off-season, Slater took classes and earned a law degree from Iowa in 1928. He served as a Chicago assistant district attorney and in 1960, became the first black member of the Chicago Superior Court. He moved to the Circuit Court of Cook County in 1964. Slater passed away in 1966 at the age of 67.

Karras was a defensive tackle for the Hawkeyes in 1956 and 1957. The native of Gary, Indiana, earned All-America honors as a junior and was a consensus All-American as a senior. He earned the Outland Trophy in 1957 as the top lineman in the nation, and was second in voting for the 1957 Heisman Trophy.

Karras and the Hawkeyes posted a 16-2-1 record in two seasons, concluding the 1956 season at 9-1 after a 35-19 win over Oregon State in the Rose Bowl. The Hawkeyes won the Big Ten title and were named national champions by at least one national media outlet.

Karras was the 10th player selected in the 1958 NFL Draft. He played his entire NFL career (1958-70) for the Detroit Lions, earning first- or second-team All-Pro nine times and being selected for the Pro Bowl four times.