You are here: Home / Agriculture / Iowa’s governor to DC to attend signing of China trade deal 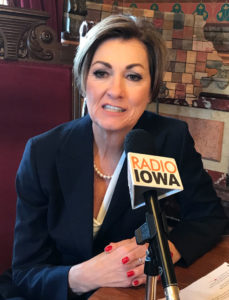 Governor Kim Reynolds is headed to Washington, D.C. to attend the signing of “phase one” of a trade deal with China.

Reynolds said she was invited by the Trump Administration to send a signal to Iowa farmers who were hit with flooding and harvest difficulties last year as well as what the governor called “trade disruptions” over the past couple of years.

“Even though all of that, especially when it came to China, they appreciated that he took a hard line on that and really said: ‘No, we’re not going to do business as usual,'” Reynolds told Radio Iowa. “…By inviting me, it’s a thank you to the farmers for believing in him and sticking with him in some really tough times.”

The full details of the agreement haven’t been released, but the Trump administration has said China has agreed to purchase more U.S. agricultural products. China’s pig population dropped at least 40 percent last year due to the outbreak of African Swine Fever. Pork is the most-consumed meat in China and Governor Reynolds said Iowa’s pork industry has the capacity to boost China’s supply.