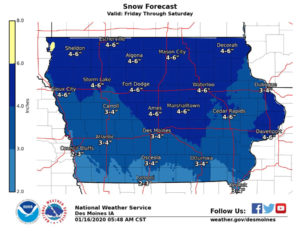 Gas up the snowblower and prepare to dress in multiple layers.

For the second weekend in a row, Iowans are bracing for the approach of what’s billed as a significant winter storm. Meteorologist Cory Martin, at the National Weather Service, says the snowfall forecast has been downgraded somewhat, but he says the storm’s potential impact on travel isn’t any less threatening.

“We’re expecting snow to begin moving into the state tomorrow morning and spread across most of the state as we get into the afternoon hours,” Martin says. “As we get into late afternoon and into the evening, the snow will likely come to an end and switch over to a period of potential freezing rain or freezing drizzle.”

While the initial forecast predicted parts of northern Iowa might see up to a foot of snow, the updated models now show much less snow — but plenty of very cold air — on the way. “Just through the day tomorrow, across the state, we’re looking at across the southern part of the state, possibly three to five inches and up across the north, we may see up to six inches of snow,” Martin says. “Then, we’re going to be dealing with some strong southernly winds tomorrow, which could create areas of blowing snow in addition to the slick roadways from the already-falling snowfall.”

The moderate-to-heavy snowfall and gusting winds are already enough to keep most of us indoors, but Martin notes the extreme cold will make going outside after the storm even more hazardous. “We could have some really strong winds behind it on Saturday that could create more issues with blowing snow, especially if we pick up some more light snowfall Saturday morning,” Martin says. “Forty and 50 mile-an-hour wind gusts could be common on Saturday along with drastically falling temperatures. Sunday morning, we’re looking at wind chills that could be minus-10, minus-20 or colder.”

Air temperatures alone on Sunday are expected to only be in the single digits statewide. Martin says temps should stay below-average for most of the state at least into the middle of next week.