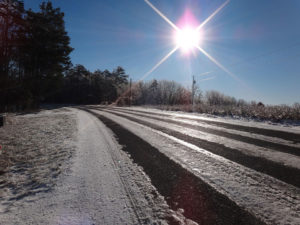 The recent weather has led to icy roads and sidewalks and with even-colder weather on the way, the slick surfaces won’t be going away soon.

The Genesis emergency departments in Davenport reported seven fall-related injuries Wednesday morning, with at least one resulting in a concussion and another in a fracture. Cooper urges Iowa homeowners to be responsible and use commercial products that melt the ice and increase your grip on driveways, sidewalks and stairs.

“You can change how you walk,” Cooper says. “Walk like a duck with your feet inward. As you take small steps and push your feet inward, you’ll hopefully have less of a chance of falling.” Some Iowans switch to ice “creepers” or studded boots during this type of weather, though one alternative is to slip on your golf shoes with cleats.

“Make sure you have the right footwear, that you’re using it properly and that it fits,” Cooper says. “Whenever you can, use the rail. If there are railings when you go up or down steps, make sure you use them.” Rubber stays grippy in colder temperatures, while polyurethane gets harder and more slippery on ice in colder weather, he says, while shoes with leather soles are among the most slippery.

He offers another tip for Iowans, even if you’re just popping out to get the mail or take out the trash. “If you’re going outside to do something, take a signaling device with you, your cellphone, a whistle, or your car keys so you can turn on the panic alarm on the car,” Cooper says. “One of the problems with falls on ice is, you hit your head or you fracture an ankle or something like that and you truly can’t get up.”

Cooper also suggests before you leave the house, make sure someone knows you have left and give them an estimated time of when you will return, and check on older neighbors and family members frequently.