You are here: Home / News / Heavy snow spreading across the state 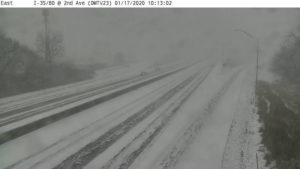 The state DOT’s 511 website shows the roads across much of Iowa’s southwestern half are completely snow-covered, with blizzard warnings posted for 18 northwest Iowa counties.

Visibility is down to a quarter-mile in some areas. Most of Iowa can expect three to six inches of snow by tomorrow.

U.S. Postal Service spokeswoman Kristi Anderson says carriers will make every effort to deliver the mail in virtually all weather conditions, but they need a hand from homeowners. “Make sure that they’re shoveling their sidewalks, their steps, their porch, and if they have a drive-up box, if they shovel around that at least six feet on each side,” Anderson says. “That would allow the carrier to pull up to the box without having to exit or back up when they’re trying to leave.”

Anderson says one side-effect of the winter weather is that some deliveries will be delayed. “Just to keep in mind, too, that as it does get dark earlier, if they could leave their light on, that helps our carriers and can prevent slips, trips and falls as well,” she says.

Many letter carriers in Iowa are now using headlamps over their stocking caps to help them see for late afternoon and evening deliveries. Anderson says carriers make every effort to deliver to an entire route, but several factors can often make that tricky.

“Especially in the far outlying areas that are going to be a little more difficult,” Anderson says, “but they will make every attempt to try and get to them either by their vehicle or if they can get out and walk and make it safely, then they will do that.”

Carriers on walking routes especially are instructed not to take risks and to skip deliveries to houses where they can’t safely make their way to the mailbox.