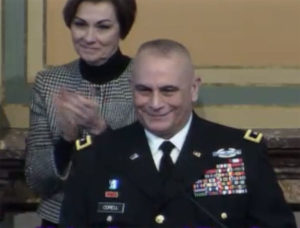 General Corell delivering his address to the Iowa Legislature.

The new leader of the Iowa National Guard says his plan for the future includes taking a tough look at how they will spend their funds on facilities.

Major General Ben Corell spoke about the issue in his address to the Iowa Legislature Thursday. “Just as critical to having the right force structure in place for the future is our ability to maintain and develop sustainable infrastructure. This means we must invest our limited financial resources now into our existing facilities that are in optimal locations as we identify future locations that offer strategic advantage as we posture ourselves for future success,” Corell says.

General Corell says this will mean the closing of some guard facilities. “We recognize the hard reality that we will need to divest ourselves of some legacy properties and infrastructure that is no longer sustainable to maintain,” he says. Corell says the changing Iowa population is part of the reason they need to evaluate things. “We can no longer delay the inevitable. At some point very soon, we will start the process to close select Army National Guard facilities within the state that no longer can support the needs of the Iowa National Guard,” according to Corell.

He says they will thoroughly review the facilities. “We have initiated a careful and deliberate process to assess the future viability of all of our facilities measured against the needs of future force structure requirements and forecasted state demographic patterns,” Corell says. “As we start this process we will work closely with affected communities, along with local and state leadership in a transparent process to minimize the impacts of any future facility closures.”

Corell says they will dedicate the new Davenport Readiness Center in April of this year. This center was built with $23 million in federal funds — and replaces the outdated Davenport Brady Street Armory which was one of our oldest active facilities. He say are also looking at a new facility in central Iowa.

“As we look to the future, we believe a Readiness Center located south of the Des Moines metro area will maximize opportunities presented by shifting demographics within the state,” he says. “We are currently in discussions for the potential development of a multi-use facility between the Iowa National Guard and the City of West Des Moines.”

A spokesman for the Iowa National Guard says there are less than five facilities that will be reviewed and they would expect only a couple of armories to close.

The review of the facilities is part of an eight-year strategic plan Corell laid out for lawmakers. Corell was named the leader of the Iowa National Guard in August to replace General Tim Orr who retired.