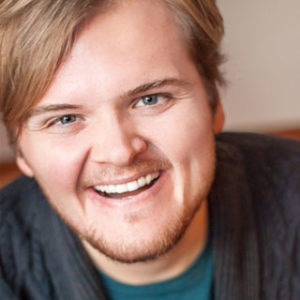 An Iowa native is coming home to the state this month as one of the stars in the touring Broadway production of “Come From Away.”

Harter Clingman, who grew up in Ottumwa and Cedar Rapids, is playing multiple roles in the musical, which is set just after the terrorist attacks of September 11th, 2001. With American airspace shut down, dozens of passenger jets were forced to divert course and land at a small airport in Newfoundland, Canada.

“A town of about 9,000 people suddenly took in 7,000 more,” Clingman says. “These kind, beautiful, generous, funny people of that community opened their doors and fed and clothed and entertained them for five days.” The 30-year-old Clingman was a boy of just ten on that September 11th. He says he knew nothing at the time about the Middle East, Al-Qaeda or terrorism.

“These are not things that this show dwells in,” Clingman says. “We invite the conversation to happen for young people and for families that come see the show, but for the most part, our show is about unconditional service and rising up to take care of our fellow human beings and this is all coming in the wake of 9-11.”

The main character Clingman plays in the show is Oz Fudge, who was the town’s police chief. “He is a living, breathing, very real human being,” Clingman says. “We talk often which is, believe me, the privilege of a lifetime to have the person I’m playing in my life. The 12 people that are in the cast play multiple roles so you’ll see a lot of changing of hats and changing of simple costume pieces to form into new humans.” Clingman has been on the tour 14 months and is thrilled to be bringing the production to his home state.

The Des Moines Civic Center is hosting “Come From Away” on January 28th through February 2nd, the show’s first-ever Iowa appearance.