You are here: Home / News / Impeachment complicates closing pitches for senators in 2020 field 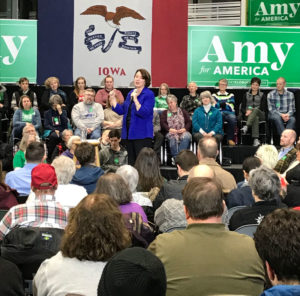 This holiday weekend is the last extended period of time the U.S. Senators running for president have to speak directly to undecided Iowa Caucus-goers.

The impeachment trial begins in the Senate tomorrow, so Senators Amy Klobuchar, Bernie Sanders and Elizabeth Warren must be in Washington.

Judith Harvey, an undecided voter from Des Moines, has narrowed her list to three candidates, including two of those senators.

“I’m listening to all the policies — ‘I say this. I promise that. Da da da da da,'” Harvey said Sunday. “But who is strong enough to get Trump out is what’s the priority on my mind.”

Harvey attended Warren’s town hall meeting late Sunday morning in Des Moines. Warren told reporters she will “do her best” to make trips to Iowa in the final two weeks of the Iowa Caucus campaign, but Warren said her constitutional duty in the impeachment trial is more important.

“This impeachment proceeding is about a president who has placed himself above the law,” she said, “and who has used the resources and the good name of the United States of America not to advance the interests of the United States, not even to help Ukraine fight off the Russians, but to do nothing but advance his own political interests.”

Klobuchar, in remarks Sunday evening at a town hall in Waukee, said at least four witnesses should be called to testify at the Senate impeachment trial.

“So that is the battle that I am going back for,” Klobuchar said, “and as I said at the debate in Des Moines, you know, if we are not going to have a trial, if they are not going to allow us to have witnesses, we might as well give the president a crown and scepter.”

Nancy Kammerer of Urbandale isn’t sure the three senators will be at a disadvantage being away from Iowa the next two weeks.

“I think they’ve been very active in Iowa and if you haven’t gotten around to see them yet, that’s your fault,” she said, laughing.

Kammerer has seen four of the candidates she’s considering in-person and plans to make her voting decision on Caucus Night, which is 14 days away.