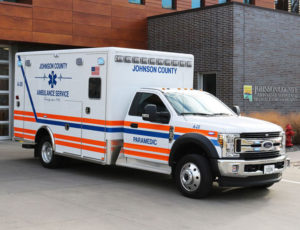 An ambulance service in eastern Iowa has rolled out a new vehicle with several high-tech innovations designed to improve safety for users and others.

Johnson County Ambulance Service director, Fiona Johnson, says their safety committee took ten months to design the ambulance. “It just incorporates all the safety features that they really wanted to include,” Johnson says. “We’ve got airbags in the patient compartment and a 360-degree camera that allows the driver to see the full perimeter of the ambulance.”

She says the extra cameras are important when the ambulance is trying make it through busy areas on game day around Kinnick Stadium in Iowa City. “It’s beneficial for us to be able to navigate through those crowds in the safest manner possible. And even just entering intersections and just every day driving — it’s good to have that extra vision point,” according to Johnson.

The ambulance has lighting that’s designed to cut the glare for drivers approaching the ambulance and also provides lighting 180 degrees. Johnson says it also has a low-frequency siren to use when approaching an intersection, which creates more vibration, and makes it safer for pedestrians and others.

“It’s really to kind of alert people who may have noise canceling headphones or earbuds or more of a sound restricted vehicle — so that they are aware that the ambulance is approaching,” she explains, “they can feel it before they might possibly hear it.”The ambulance has several other features designed to make it easier and safer for the medical personnel working inside.

The new ambulance costs around $232,000, compared to around $175,000 for those purchased in the past. But Johnson says the added safety and comfort features make it worth it for the crew and the public. She says other ambulances might have some of the features — but this one is unique.

“I can safely say it’s completely 100 percent tailored to meet our needs. This isn’t something that you can buy off the shelf. No other ambulance service in the state would have this exact same ambulance,” Johnson says. The service has eight vehicles and provides all the ambulances for 911 calls in Johnson County. Johnson says they will use this same model when purchasing new ambulances to replace those going out of service.