You are here: Home / News / Loitering in the left-lane on Iowa highways could cost you 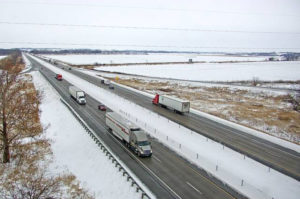 An Iowa Senate Committee has given its approval to new fines for drivers who loiter too long in the left lane on an interstate or four-lane highway. Senator Zach Whiting of Spirit Lake has been given the task of steering the bill through the senate.

“I think it is an identifiable problem for a lot of drivers and it’s just a dangerous thing — the efficient flow of traffic being impeded by people camping out in the left lane,” Whiting told Radio Iowa.

Whiting travels both Highway 20 and Interstate 35 on his commute to the state capitol and sees drivers who fail to yield the left lane to faster-moving vehicles.

“I always smile because when I’ve got my cruise control set and I see somebody coming really fast on my left, there’s always somebody coming faster behind ’em,” Whiting said, “and so just move over, get over.”

If the bill becomes law, Whiting expects it will include a requirement that the DOT use its digital signs or add some highway signs to alert drivers to move out of the left lane if they’re not passing.

“Sometimes laws change and we just want t make sure that we put people on notice,” Whiting said.

Last year, a bill that would have established a $100 fine for drivers who linger too long in the left lane stalled in the Iowa House. This past summer, the Illinois State Police deployed unmarked vehicles to catch drivers misusing the left lane and handed out tickets that carry a $120 fine.