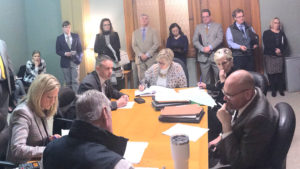 If the U.S. Supreme Court rules the Affordable Care Act is unconstitutional, a bill that’s emerged in the Iowa Senate would keep a popular part of the law in force for some Iowans.

Senator Brad Zaun, a Republican from Urbandale, is the bill’s sponsor. “The pre-existing conditions that was part of the Affordable Care Act was a great thing,” Zaun said earlier today, “and the intention of this bill is to protect that in the State of Iowa.”

A lawsuit filed by 20 Republican-led states and backed by the Trump Administration could be decided soon. If the Supreme Court strikes down the Affordable Care Act, insurance companies will again be able to deny health coverage to people with pre-existing medical conditions. Zaun’s bill only applies to state-regulated insurance plans and would shield about one out of 10 Iowans from getting kicked off their insurance plan.

Danielle Oswald-Thole of the American Cancer Society Action Network said cancer patients appreciate the proposal, but would like to see it expanded.

“There are many other patient protections in the Affordable Care Act, including making sure that insurance companies can’t institute lifetime and annual caps,” Oswald-Thole said during a senate subcommittee hearing. “We have people we represent who thought they had good coverage, got cancer and maxed out their coverage on their first brain scan.”

Senate Democratic Leader Janet Petersen of Des Moines voted to advance the bill out of a senate subcommittee. Petersen said many Iowans are concerned about what happens if the Affordable Care Act goes away.

“This bill just touches on pre-existing conditions,” Petersen said. “I know there are a lot of parents who have their kids on their health insurance plan, too.”

The Affordable Care Act lets adult children get insurance coverage through their parent’s plan until they reach the age of 26.