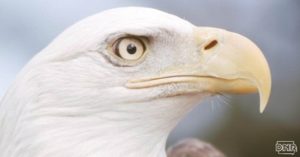 The Department of Natural Resources is asking for the public’s help in finding the person who shot an eagle earlier this month in central Iowa.

DNR Conservation Officer Dustin Eighmy says the eagle was found at an apartment complex on the northeast side of Ankeny.
He says police got a call and an officer found the eagle sitting on the ground, which was not normal behavior. “At that time he didn’t observe any blood or anything coming out of the eagle. It just was acting strange, not flying up.” Eighmy says.

He says eagles can sometimes act this way if they get lead poisoning from eating animals that have been hit with lead shot. But, that idea quickly changed when someone from an agency that works to rehabilitate raptors showed up. “Once they captured it there was blood just immediately coming out of the moth of the eagle — which was strange — they had never seen that lead poisoning cases.” according to Eighmy.

The eagle died as it was being taken to get help. Eighmy says x-rays determined the bird had been hit in the lung with a lead BB, which makes them think it was shot on purpose. “It could be someone with a single-shot BB gun in town. With an injury like that, we are not suspecting that that bird to have flown very far from where it was shot,” Eighmy says. “That eagle is going to succumb to its injuries fairly quickly — which it did. So we are putting that bird probably shot either January 2nd or the early morning hours of January 3rd.”

He says with only one BB found in the bird it seems unlikely that it was shot by a shotgun. Eighmy says someone was likely illegally shooting at birds. “You look at an eagle and most people always know what that is. You’ve got the bright white head, the brown body, the yellow feet, most people know what that looks like,” Eighmy says. He says you may occasionally see an immature eagle that doesn’t have its white head yet.

Eighmy says anyone with any information on the shooting of the eagle can call him at: 515-238-5006. “They also can call our TIP Hotline — which is Turn In Poachers Hotline — and that is 1-800-532-2020. There is also a website that they can go to — just go to IowaDNR.gov and they can fill out a form to remain anonymous,” Eighmy explains.

Bald eagles are protected by federal law, with fines of more than $20,000 for harassing, killing or wounding an eagle.