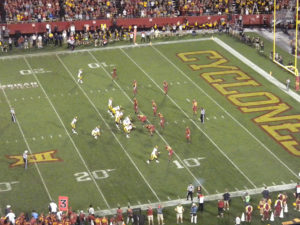 Iowa and Iowa State playing in Ames earlier this year.

Legislators in the Iowa House and Senate are discussing steps that would let Iowa college athletes earn money if their name or likeness is used for profit.

Senators Nate Boulton, a Democrat from Des Moines, and Republican Brad Zaun of Urbandale have been talking about establishing trust funds for student athletes who might be compensated and they introduced a bill outlining their ideas yesterday. According to Boulton, Division I college football has become the minor league for the NFL.

“There’s a general consensus that the power imbalance is unsustainable right now with the amount of money that’s going into college athletics and the inability to see anything other than facilities and coaching salaries be the outlet for that,” Boulton told Radio Iowa.

Now that sports betting is legal in Iowa, Boulton said gamblers are profiting off college athletes, too.

“There’s money all around this system and on an island, without any resources coming to them, are the student athletes who are putting their bodies on the line,” Boulton said.

Representatives Ras  Smith, a Democrat from Waterloo, and Republican Joe Mitchell of Wayland met last month with former University of Iowa star Marvin McNutt to discuss how trust funds might work — so compensation comes after the student athlete’s college career is over.

“Representative Smith (and I) have both said that we think that these guys should have the rights to the fruits of their own labor,” Mitchell told Radio Iowa. “A lot of these guys aren’t going to play pro, but they would be able to make some money in college.”

Mitchell considers playing a sport like football at the Division I level to be like the jobs other students have — and get paid for — during college.

“If we’re going to go to have these guys go out there and play and make money for the universities and if the coaches can make money off endorsements, but the players can’t — who are really the ones that people come to watch — that’s where I see the problem with it,” Mitchell said.

Mitchell said this is a sensitive issue, but if legislators can come up with a bipartisan consensus, the Iowa law could be a model for other states and even the NCAA.