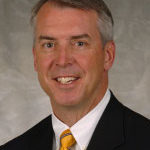 The College Football Playoff (CFP) Management Committee has appointed Iowa Athletics Director Gary Barta as selection committee chair for the 2020 football season. Barta replaces Rob Mullens, the athletics director at the University of Oregon, who served as chair for the past two seasons.

The new members will begin three-year terms starting this spring. They will replace Mullens, Frank Beamer, and Chris Howard, whose terms have expired.

​”We are delighted that Gary will serve as chair,” Hancock said. “He was a valuable member of the committee last year and he will be a good leader inside the room and a good spokesperson to let folks know what the committee did and why.”

“I had a terrific experience my first year on the committee,” Barta said. “I have so much respect for the other committee members, and for Bill Hancock and the CFP staff. I’m honored to be asked to serve as committee chair and look forward to working with this group again in 2020.”

Barta was appointed to the CFP selection committee in January 2019. He has served as the Henry B. and Patricia B. Tippie Director of Athletics at the University of Iowa since August 2006.