You are here: Home / Business / Leader of National Association of Manufacturers touts the industry in Pella 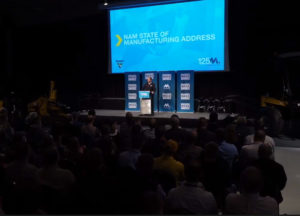 The president of the National Association of Manufacturers (NAM) hit on some familiar themes during his address in Iowa today on state of manufacturing.

Jay Timmons spoke in Pella at Vermeer Manufacturing, and says even with all the advances in the industry — people are still important.

“One of the biggest misperceptions is that automation is coming for our jobs. But manufacturers know the truth—technology makes us safer, more effective,” Timmons says. “Some jobs will shift, often to higher-skilled, higher-tech positions, But people, people will always be what make this industry possible.”

He says they are working to change the thinking on manufacturing. “Our members tell us this is their top concern—educating Americans on these opportunities…and finding workers for the hundreds of thousands of manufacturing jobs open today and the 4.6 million jobs that will be open over the coming eight years,” Timmons says.

He says the association is launching a program called “Creators Wanted” that will go on a our mobile tour this spring to show some 250,000 Americans a hands-on experiences that demonstrate the high-tech opportunities in modern manufacturing and “open their minds” to what the industry offers. Timmons says it’s an important part of building on the success of the manufacturing industry. 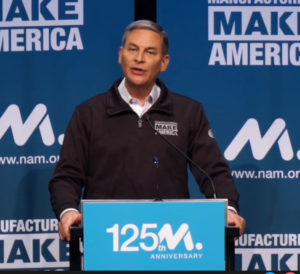 “As we start this new decade, manufacturers are indeed at a turning point. The NAM’s most recent quarterly Manufacturers’ Outlook Survey found 68% of manufacturers have a positive outlook for their businesses,” Timmons says. “You might say, two out of three sounds good. But in mid-2018, we were at record high levels of optimism at 90 percent”

Timmons says the survey came before the recent developments in the China and U.S.-MCA trade deals, so the optimism is expected to increase. He says the industry needs continued support from government. “If our elected leaders choose to enact policies that advance manufacturers’ priorities, our industry is prepared to lift up our entire country,” Timmons says.

Timmons took questions after his speech and told the audience the one thing people can do to help is go to the polls.

“Voting matters. Not only that — but speaking up matters. Coming and talking to elected officials is important — but it’s really important to talk to candidates — because while they are on the campaign trail, they are not only forming their agenda, but they are making promises,” Timmons explains. Timmons says it’s human nature to want to carry out those promises, so the voters need to express their opinions when they have the chance.