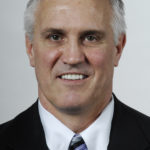 Iowa State football coach Matt Campbell announced today that Mick McCall, who was the offensive coordinator and quarterbacks coach at Northwestern the past 12 seasons, was added to the Cyclone coaching staff to coach the running backs.

McCall, who has 41 years of collegiate coaching experience, including 13 seasons as an offensive coordinator at the FBS level, will reunite with Campbell. The duo were on the same staff at Bowling Green from 2003-04 and 2007.

“Mick will be a wonderful addition to our coaching staff,” Campbell said. “Mick has had an outstanding career in coaching and his vast experience and knowledge of the game will certainly give our offensive staff room an added boost. Mick was one of my mentors when I began my career in the coaching profession and I have no doubt he will be a great fit for Iowa State football.”

McCall joined the Northwestern coaching staff as the director of the offense and quarterbacks coach in 2008, helping the Wildcats go 89-67 and record three 10-win seasons (2012, 2015, 2017). NU qualified for nine bowl games, winning four, and claimed its first-ever Big Ten West title in 2018.