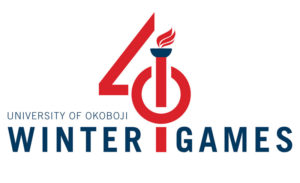 Some Iowans detest the freezing weather, but hearty snow lovers in northwest Iowa are embracing the chill with today’s opening of the 40th annual University of Okoboji Winter Games.

While the university is fictional, devotion to the event is very real, according to Kylie Zankowski at the Iowa Great Lakes Area Chamber of Commerce. The games feature a host of indoor and outdoor activities. “One, of course, is the signature broomball tournament that started this whole event back in 1981,” Zankowski says. “There’s a chili cooking contest, there’s a dessert contest, there’s snow softball. We have our Okoboji Winter Games twist on all sorts of different activities from hammerschlagen to a beanbag tournament.”

The games include a Snowball Drop where thousands of pingpong balls will fall from the sky, some with special numbers for prizes. While most people would avoid falling into a frigid lake, others run toward the hole in the ice — the Polar Plunge is a fundraiser for the Arnolds Park-Okoboji Fire and Rescue Squad. 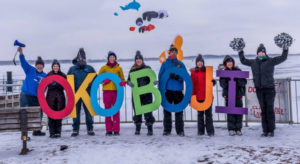 “They cut a hole in the frozen waters of West Lake Okoboji and a hundred-plus brave souls line up and they actually pay to jump into the lake,” Zankowski says. “It’s $20 to jump. You jump into the freezing water surrounded by all sorts of friends, family and cheering people.” The closing ceremonies of the Winter Games will come on Saturday night with what’s known as the Burning of the Greens.

“We kick off with the cheerleaders doing one last cheer, the chairs announcing the winners of the different tournaments, and then we start the chant, ‘Light that fire!,’ and they light up the giant bonfire made of hundreds of Christmas trees,” Zankowski says. “Everyone cozies up and stays warm and the sky is lit up with a beautiful fireworks display.”