You are here: Home / Education / Hamburg School District will get another chance at certification 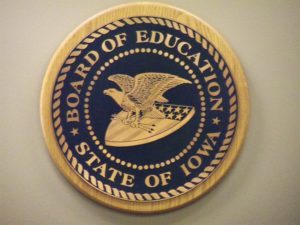 The Iowa Board of Education had a split 4-4 vote Thursday — nullifying the Hamburg School District’s certification request. But Superintendent Mike Wells says it was still a positive meeting.

“We had very good conversation, and they are considering a different model for education for small schools in Iowa. Sometimes you go in front of boards, and you figure it’s just lip service. They don’t really listen to you. This board took the time. It was only scheduled for 20 minutes, and we were in there for an hour-and-a-half,” Wells says.

Wells believes Hamburg had a solid plan to resurrect high school classes under a career academy format, in which students would receive a certificate for special skills, in addition to their high school diploma. Wells says the key to the plan is sharing instructors with Essex–where he is also superintendent.

“Finding certified staff is very difficult,” he says. “By being able to share a high quality staff that Essex has for some of the programs–and we have some teachers that are certified at our current school for high school–without Essex, this doesn’t work.”

While saying the board liked the career academy format, Wells says some members questioned Hamburg’s projected enrollment numbers. “The numbers we presented to them were 25 students–not counting any kids from Sidney,” Wells says. “That would be the number for year one of the program. We do have kids in each grade level. We have home schooled kids that will be coming. We know that number will be higher than that, but we wanted to be realistic. We just assumed that those kids that are currently going to Sidney will stay there. So, there were concerns with that.”

Hamburg high school students are now attending classes in Sidney under a tuition-in agreement. Because one board member was absent, the board set another meeting with Hamburg for its February meeting. Wells says the district will be better prepared for the second go-around next month.

“We will have an actual schedule as to what Hamburg’s schedule would look like. We will meet with the Iowa Department of Education, and we will go through to make sure we can meet, offer and teach,” Wells says. “We feel that the plan we presented does that, but we want to make sure that when we get to that meeting, there are no red flags from the Iowa Department of Education.”

State education board officials rejected Hamburg’s first certification request late last March–right during the Missouri River flooding that swamped most of the community.