You are here: Home / News / Woodbury County Supervisor to fight residency ruling against him 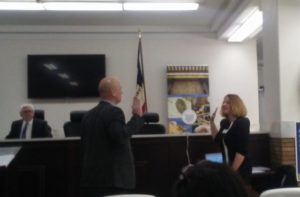 Jeremy Taylor is sworn in.

The controversy on where Woodbury County Supervisor Jeremy Taylor lives and how that impacts his standing as a voter and public official continued with new twists today.

County Auditor Pat Gill issued a ruling today that Taylor’s voter registration is canceled because his new home on Christy Road is his primary residence instead of his previous home on Grandview Boulevard. Taylor says he still owns the original home and lives there part of the week — and the auditor ignore the “overwhelming evidence.”

“Including five statements from adjacent neighbors who testified that I have met the legal requirements of residency — and do reside in the Grandview residence,” Taylor says. Taylor says he is taking the auditor’s decision to court.

“I’m going to appeal this decision, which is my right to do. And just made that intention known in the county attorney’s officer — which will stay the vacancy hearing on Monday,” Taylor says. Taylor is a Republican who is also a candidate for Iowa 4th District Congressional seat.

The Monday hearing would have had Auditor Gill, County Attorney Patrick Jennings and County Treasurer Michael Clayton decide if Taylor should continue to serve as a supervisor representing his district. A petition from the district questioned Tayor’s residency and he says it is an attack against him by local Democrats.

Auditor Gill declined to comment on Taylor’s comments or his ruling.