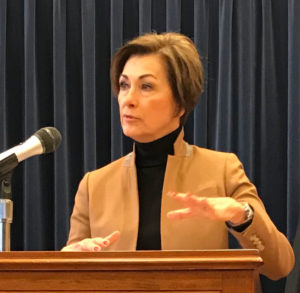 Iowa’s governor has joined with the governors of Nebraska, Kansas and Missouri in asking federal officials to fight flooding along the Missouri River on a regional basis. Governor Kim Reynolds says it’s time for a comprehensive approach that seeks to limit flooding.

“I think it makes us stronger when we have four governors working together because that brings our two senators from each of our states as well as our congressional delegation,” Reynolds says.

Reynolds says the Army Corps needs to make the protection of people and property their top priority in managing the flow of the Missouri River.

“To not keep going the same thing and expecting different results,” Reynolds says.

The governor says there are bottlenecks or pinch points along the river that should be studied.

DeSoto Bend is a National Wildlife Refuge near Missouri Valley, Iowa. Nebraska’s governor says 10 months after flooding began, the four states are still trying to recover and rebuild. The governor of Kansas says the frequency of Missouri River flooding has increased in the last 10 to 15 years and the four states have borne the brunt of the damage. Missouri’s governor says it’s not fair that Midwesterners continue to risk their lives, homes, livestock, and futures because the Missouri River flood-control system is insufficient.