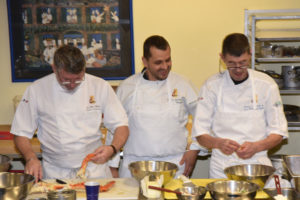 French Chefs Didier Lassaigne and Jean-Cristophe Martin remove crab meat from the shell as Fabian Gauthier watches during a demonstration for DMACC students.

A group of French chefs are visiting the Des Moines Area Community College (DMACC) campus as part of the anniversary celebration of an exchange program with the school’s culinary program.

DMACC French professor Maura Nelson says it also started when the state of Iowa started a sister relationship with Saint-Étienne. in 1985. She says Saint-Etienne is about 45 miles outside of the gastronomic heart of France,  which has a chef’s association. They  decided to send two chefs here in 1986 to DMACC because the school had a culinary program and they thought that would be a good fit.

Nelson says the exchange program was a success and a kept going. “Every year since then we’ve had two chefs from the association — they come every year in January — they spend two weeks here working with our faculty doing demonstrations of traditional French cuisine,” according to Nelson. 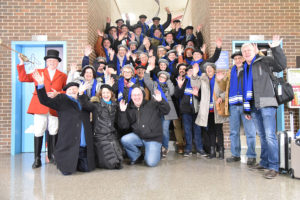 The chefs arrive at the Des Moines airport.

She says the top eight students in the DMACC program get to go on a trip to France. “We take the students all over France. We take them and try to give them some really good experience as we take them to Michelin star restaurants. We take them to some of the better-known vineyards. We show them a lot about French culture, French history, but particularly about French food and wine,” she says.

There are 20 chefs visiting this year as part of the 35th anniversary of the program. Chef John Andres is the director of the Iowa Culinary Institute at DMACC. “As far as we know, we are the only community college or culinary school in the country that has this type of long-lasting relationship with any foreign culinary group,” Andres says.

Andres says it has become an annual tradition that everyone loves. “You know, our students love these demonstrations — this is what they look forward to all year long — it’s kind of a penultimate point. Seeing these students hanging on every word, every action of these demonstrations during these couple of weeks is just incredible to see,” according to Andres.

Professor Nelson says there’s a few more things going on this year with the celebration of the 35th anniversary of the exchange.
“We not only are having the chefs here doing cooking demonstrations — we are also entertaining the spouses. So we’ve tried to take them to different places here in Des Moines, we’re visiting Maytag, they are going to give us a tour of (making) Maytag cheese. We’re going to go to Pella, we’re going to go to Ames, we’re going to Winterset,” Nelson says. “Again as chef Andres says, it’s really nice because it’s an exchange. They also learn things from us.”

Nelson says the visiting French chefs get to take in our culture too and find that not everything we call French is linked to their country.  “French toast is actually not theirs, French salad dressing is not theirs,” Nelson laughs. “They always go ‘French dressing,’ dressing for them is basically oil and vinegar, they don’t go for the Ranch dressing, blue cheese, that’s a sauce to them.”

The school holds three special dinners featuring the French cuisine during the stay of the chefs at DMACC.