You are here: Home / Education / ISU student happy to pursue an up and down career in rollercoasters 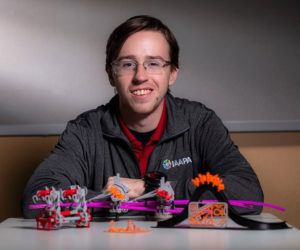 A senior in mechanical engineering at Iowa State University is pursuing a dream he’s had since he was a boy to design rollercoasters.

Charlie Wickham, who grew up in Minnesota, recalls family vacations to amusement parks where his parents and older brother gravitated toward the rollercoasters. Wickham was fascinated by the fast moving, noisy rides but had no interest in actually getting on one.

“I loved rollercoasters as an idea. I loved watching them. I had a little camcorder and I would record them as they went through the layout, but I didn’t want to ride them,” Wickham says. “My brother forced me to get on a rollercoaster and from then on, it’s been crazy, just riding everything I could possibly get to.”

That first rollercoaster ride was on the Maverick at Cedar Point in Sandusky, Ohio. Since then, Wickham’s ridden some 250 roller coasters around the world. Wickham served as ambassador the past two years for the largest amusement industry trade show, and he also landed a six-month internship at Premier Rides, an amusement ride manufacturer in Baltimore.

“I got to work on a rollercoaster every morning,” he says. “Being able to be there when we opened it for guests and to see the first train of guests going around on that coaster and just loving it is an incredible feeling, so amazingly rewarding.” Wickham says he’s hooked and his career path is set.

“My goal is to enter into this industry as an engineer and work with these companies to design better rides and new concepts and bring something new to the industry that we haven’t seen,” he says.

Even Wickham’s business cards are specially made on a 3-D printer. They fold out into a full-circuit model of a miniature roller coaster.