You are here: Home / News / Le Mars excited to get the wheels rolling for next RAGBRAI 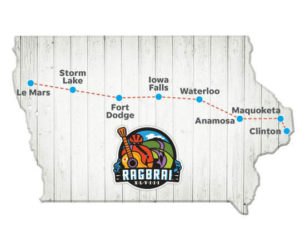 Planning is getting underway in eight Iowa cities for a massive tourism influx after organizers of the annual bicycle ride across Iowa unveiled their list of host cities over the weekend.

RAGBRAI will start in the northwest Iowa town of Le Mars in July, with overnight stops in Storm Lake, Fort Dodge, Iowa Falls, Waterloo, Anamosa and Maquoketa. The final stop is on the Mississippi River in Clinton.

Le Mars Mayor Dick Kirchoff says he’s “totally elated” by the news his community will be the starting point.  “I’m so happy for us in Le Mars that we were able to accomplish this,” Mayor Kirchoff says. “We’ve worked hard on it for quite a number of years to try to get it and never have. It’s going to be a great asset to our town. It’s going to be a lot of work but the people of Le Mars know how to work.”

“It’s just such a great thing for the town and for the whole area, really,” Sturgeon says. “The way they brought it up is, they were talking about a gentleman who played an integral role in it and how he liked ice cream so much. They broke tradition and did not even go out of order and just said, ‘We’re going to spoil the secret — we’re starting in the ice cream capital of the world.'”

Sturgeon says he’s confident the people of Le Mars can open their hearts as well as their homes to the thousands of bicyclists expected to converge on town this summer. Le Mars last hosted RAGBRAI in 2005 and many hundreds of cyclists camped overnight at the Plymouth County Fairgrounds. Loren Schnepf is the president of the Plymouth County Fair.

“The last time RAGBRAI was here, when they left, the next morning, you didn’t know anybody had been here,” Schnepf says. “They are more than welcome to use our fairgrounds and we’ll certainly host them with a smile. We’re just glad to see them come to town.” The fair board will have one week to turn the fairgrounds from hosting RAGBRAI into an exhibit area showcasing the fair.