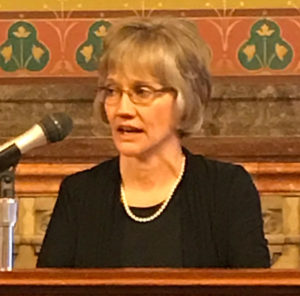 Governor Kim Reynolds has appointed a Cedar Rapids lawyer to an opening on the Iowa Supreme Court.

“She is an incredible, inspiring story,” Reynolds said. “She’s smart. She’s articulate. She’s hard-working. She brings a breadth of experience to the courts.”

Reynolds and Oxley both paid tribute to the late Chief Justice Mark Cady, who died of a heart attack in November.

“No one can replace Chief Justice Cady, but I will strive to emulate the kind spirit and the servant attitude he brought to the role of an Iowa Supreme Court justice,” Oxley said.

Oxley thanked her law partners and the federal judge who was her mentor. 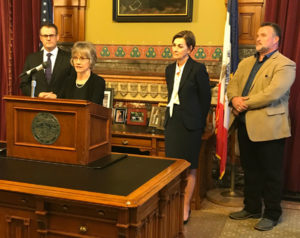 “To my future colleagues on the Supreme Court, I look forward to working together as we wrestle with the important legal issues that come before the court in an effort to provide justice and clarity to t
he citizens of Iowa,” Oxley said.

Oxley is a graduate of Greenfield High School who became a CPA. The governor says Oxley worked as a credit union examiner for the State of Iowa.

“Eventually she decided to go to law school at the University of Iowa,” Reynolds said. “…She graduated third in her class and served as an editor of a law journal and she became a mother twice over.”

The governor noted Oxley had a baby girl during her first year in law school and right before her third-year exams, she had a baby boy.

This is the third justice Reynolds has named to the court. Reynolds interviewed Oxley and two other nominees last week.

Oxley is the fourth woman in state history to be appointed to the court. She joins Justice Linda Christensen on the court and it will be the first time two women serve on the court at the same time.

“We need more women in the courts, yes, but I don’t make my decisions base on gender,” Reynolds said. “They earned those selections.”

Reynolds will appoint a fourth justice to the Iowa Supreme Court this spring. Acting Chief Justice David Wiggins has announced he will retire in March.