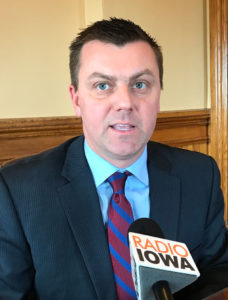 About $20 million separates the public school funding plans Republicans in the Iowa House and the Iowa Senate are proposing. Senate Republicans like Majority Leader Jack Whitever of Ankeny favor an increase of 2.1% in general state spending on K-12 public schools.

“This is an amount that we feel allows us enough money to continue to fund our other priorities as well,” Whitver says, “Whether that’s state troopers, mental health, health care issues — we want to make sure that fits in the larger budget picture.”

“I don’t think it really digs our schools out of the hole,” Smith says, “understanding that we’ve dug a trench and we’re slowly filling it in like a teaspoon at a time and that’s not going to get us where we need to be.”

Republicans control a majority of seats in the House and Senate, so GOP leaders will likely negotiate a school funding deal in the next couple of weeks. The decision is for general state aid for the school year that starts next fall.