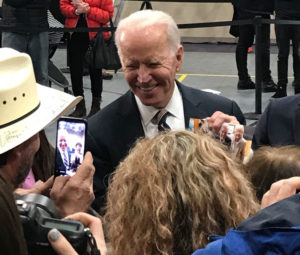 Former Vice President Joe Biden is offering a response to President Trump hours before Trump arrives for a rally in Des Moines.

“This is a president who laughs at, insults, demeans, demonizes other people,” Biden said. “He pits us against one another.”

Biden spoke to a crowd in Waukee just before noon. Biden accused Trump of creating a “culture of cruelty” in the country.

“He traffics in the ugliest lies and bigotry and prejudice,” Biden said. “…He’s more bully than president. He’s more George Wallace than he is George Washington.”

“I can hardly wait to debate this man,” Biden said.

Donna Dickerson of Clive is among those who sat on the bleachers in a gym to hear Biden today. She said Democrats will lose if they choose a nominee from the party’s left wing and she says Biden has the right kind of temperament for the moment

“He isn’t an angry individual that is spiteful and I believe that we need healing in this world right now and we need it from a moderate,” Dickerson said. “I don’t believe we’ll win the election we don’t have a moderate.”

Jim Goodson of Clive supported Biden’s 2008 bid for the White House and intends to support him again Monday night.

“My kids are big supporters of (Elizabeth) Warren, but I just don’t think this is the year to run on Medicare for All, for instance. I think that will lose us the election,” Goodson said. “I just think Biden’s got the best chance. I think he’s a good man. He’s honorable and he’ll do good for the country and I just think he’s the right guy for this year.”

Biden will campaign in Newton and Ottumwa later today. President Trump’s rally is scheduled to begin at 7  tonight. Vice President Mike Pence is campaigning today in western Iowa and will join Trump in Des Moines this evening.