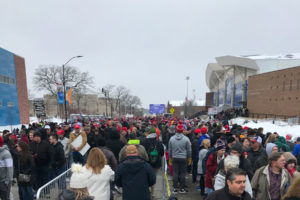 People lined up to get into Trump rally.

The crowd for President Trump’s rally this evening in Des Moines started showing up Wednesday night. A woman named Britany flew in from Boston.

“I live in such a liberal state they don’t have them there,” she said after buying a red stocking cap embroidered with “Trump 2020.”

Gary McGuinness drove up from Missouri.

“I’ve watched (President Trump’s rallies) on TV. This is the first one I’ve been at and I’m excited about it,” McGuinness said. “We came all the way from Kansas City.”

Steven Reed of Carlisle was at his first Trump rally, too, and excited to be among like-minded people.

Jeff Mullin of Des Moines missed Trump’s December 2015 rally on the State Fairgrounds in Des Moines, but wasn’t going to miss this one.

“Here’s the thing. We wanted to be a part of this historic get-together,” he said. “I mean, it’s not every day you have a Trump rally roll into Des Moines, Iowa, right? So I have to be here to see this.”

Vendors selling food and Trump-themed clothing lined the street in front of Drake University’s Knapp Center, where the rally was held. A woman who flew in from New Jersey says stocking caps, scarves and blankets were the most popular purchases for those who camped out overnight.