You are here: Home / News / Trump here today, to deploy dozens of surrogates to Iowa for Caucuses 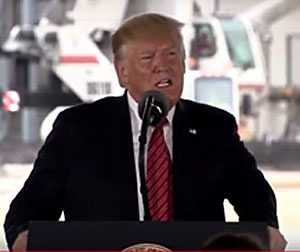 President Donald Trump will speak at a rally tonight in Des Moines,- just before the Iowa Caucuses that Democrats and Republicans will hold in four days.

GOP challengers Joe Walsh and Bill Weld have campaigned in the state, but polls show an overwhelming majority of Republican voters in Iowa back Trump. Marc Lotter with the Trump re-election campaign says the rally is a way to re-engage with the president’s supporters.

“The president takes Iowa very seriously. He understands that,” Lotter says. “…It’s also going to bring together thousands upon thousands of people who are excited for what the president is doing.”

A handful of Republican Parties in other states have cancelled primaries and caucuses, but the Iowa GOP’s Caucuses will go on. Jeff Kaufmann, the Iowa Republican Party’s chairman, has said it’s about maintaining the first-in-the-nation status of Iowa’s Caucuses for both parties.

“It’s about showing the nation, once again, that our voters — and really both Republicans and Democrats, but in my case, Republicans — are up to this task. They can be discerning. They’re interested and we can put on a professional product in real time that’s transparent because 2024 is just around the corner,” Kaufmann said earlier this month during a joint appearance with the Iowa Democratic Party’s chairman on Iowa PBS.

Trump won the state of Iowa in the 2016 General Election by a more than nine point margin.

“He intends to win every state that we won in 2016 and he plans to grow the map,” Lotter says. “So we’re going to fight to make sure Iowa stays in President Trump’s column.”

The Trump campaign has announced it will have more than six dozen “surrogates” in Iowa on Caucus Day, including Trump’s 2016 competitors Rick Perry and Ben Carson as well as the president’s sons Eric and Donald Trump, Jr.