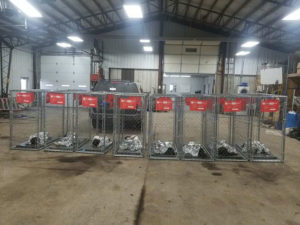 Des Moines police collected several cages this morning that were left on public sidewalks and a park.

Sergeant Paul Parizek says they got multiple calls reporting cages as suspicious.  “Appears to be some sort of political statement. It’s a chainlink fence cage with a doll inside that looks like a child — and then it’s got an audio speaker in there with the sound of a child crying,” Parizek says. The cages have a sign on them that says #dontlookaway.

An immigration group in Texas boasted on social medial about putting the cages out as a protest. Parizek says his department is concerned about the location — not the message. “We really don’t have a huge issue with it, as part the Caucuses and our role in the nation as being part of the political process, we accommodate all sorts of protests,” Parizek says. “Our only issue with this was that they abandoned and left behind, blocking sidewalks in front of the schools and again in the park.”

He says they had to go around with a tow truck and pick them up. Parizek says the group can pick them up if they want — as they are not treating it as a criminal issue. Parizek says that any items to promote political agendas, candidates, or expressions of opinion, should not be left on public sidewalks or other public property.