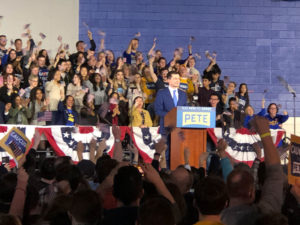 The data dump from 62 percent of precincts shows Pete Buttigieg in first place, with nearly 27 percent of delegates in those precincts. Bernie Sanders close behind with just over 25 percent. Elizabeth Warren was in third and Joe Biden was in fourth.

“The reporting of the results and circumstance surrounding the 2020 Iowa Democratic Party Caucuses were unacceptable,” Price said. “As chair of the party, I apologize deeply.”

There was a glitch in the smart phone app developed to collect the Caucus Night delegate totals, along with raw votes for each candidate.

“The bottom line is that we hit a stumbling block on the back end of the reporting of the data,” Price said, “but the one thing I want you to know — we know this data is accurate.”

Buttigieg was campaigning in New Hampshire when the first batch of numbers were released.

“We don’t know all of the numbers, but we know this much: a campaign that started a year…should have no business even making this attempt has taken its place at the front of this race,” Buttigieg said.

Sander’s senior adviser said this preliminary data shows Sanders seems to be winning the “popular vote” in Iowa’s Caucuses. For the first time Iowa Democrats collected raw vote totals based on how many people supported each candidate at the beginning and the end of Caucus Night.

It’s not clear when all the results will be confirmed and released by the party.

“This is personal to me. I’m a lifelong Iowan. I have caucused for 20 years,” Price said. “We want Iowans to be confident in the results and in the process and we are going to take the time that we need to do just that.”

Price was asked by a reporter if he would be resigning from his party post.

“When I ran for chair I made a commitment to see the process through,” Price said. “That is what I am working on. That is what I will continue working on and whatever happens after that is to be determined.”

In 2012, Iowa Republican Party chairman Matt Strawn resigned under pressure. He had announced on Caucus Night that Mitt Romney won by eight votes. A few days later after a canvas of all precincts, Rick Santorum finished first — by a 12-vote margin.