You are here: Home / News / GOP governor has ‘great confidence’ in Iowa Democrats on Caucus data 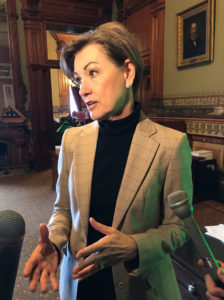 Republican Governor Kim Reynolds is expressing bipartisan solidarity with the Iowa Democratic Party as it wades through the controversy over not-yet-released Caucus Night results.

“Most importantly we want to make sure the results that we do get are accurate, that we’re not circling back from that, so I think that they should take the time and get the numbers right,” Reynolds says, “and I have great confidence that we’ll be able to provide accurate numbers to not only Iowans, but the country.”

“We want to make sure that the results are accurate and that we’re doing everything we can to uphold the integrity of the process,” Reynolds says, “and that’s what they’re doing and that’s the main thing.”

“We still do it really well. We’ll learn from this, just like we did before,” Reynolds says. “We’ll continue to work with both parties. You know, for two parties that have a lot of differences, this is one area where we work really well to make sure we do this right moving forward.”

Reynolds told reporters today she has every expectation that Iowa will host the first-in-the-nation caucuses in 2024 — and she pointed to a tweet from President Trump expressing support for Iowa’s lead-off position.

“Thank you to Iowans all across this state, to both parties, to the candidates and their team who have spent a lot of time in Iowa,” Reynolds said of last night’s events. “We had a lot of Iowans get out and do their civic duty and participate in the caucuses. I just really appreciate the process and Iowans showing up and participating.”

State Senator Pam Jochum was the chair of her Democratic precinct in Dubuque and was not able to report results with the smartphone app that’s at the center of the Caucus-night controversy.

“I couldn’t even download it and I tried numerous times. It wouldn’t let me get past the password,” Jochum says. “I don’t know what was going on and it’s just sad because they tried very hard this year to make it transparent and streamlined and it fell flat on its face.”

Jochum used the back-up plan — as many precinct leaders did — and submitted her precinct results by phone last night.

“We got in right away as we pretty much had our alignments done by about 8:30, so we were done in enough time that we weren’t backing up on phone calling,” Jochum said.

Other precinct leaders complained of waiting on hold, without being able to get through and report their results.