You are here: Home / News / ‘Why Iowa?’ author says keeping Caucuses first to be ‘really difficult’ 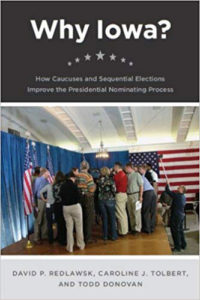 The former University of Iowa professor who wrote a book titled “Why Iowa?” after the 2008 Caucuses sees irony in the title today.

“Iowa has been challenged in its position for many, many election cycles,” David Redlawsk says, “but we always had a pretty good response, I though, as to ‘Why Iowa?'” Not being able to get the results out in a timely fashion adds to the piling on and I think it makes things really difficult moving forward.”

“Buckle up for the state of Nevada. I understand they’re using the same app that seems to have failed here,” Redlawsk says. “I hope they’re going to go 24/7 on testing that thing.”

Nevada’s Caucuses are scheduled for February 22nd. Redlawsk is now the dean of the University of Delaware’s political science department, but he’s been in Iowa since August, following the campaign and planning to update his book. He’s heading back east now and unsure if that’s what he’ll do.

“I need some time to figure out what’s next,” Redlawsk says. “I admit I have some concern that this research project itself just isn’t going to play out the way I had hoped, but I do think there’s something else there.”

Redlawsk recorded hours of interviews with Iowans as well as candidate events. He says exploring grassroots politics independently of what happened Caucus Night may become his focus.