You are here: Home / News / With no results, candidates offer their interpretations of Iowa Caucus finish 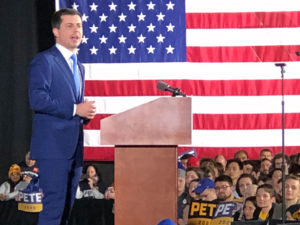 The candidates who had Caucus Night celebrations in Des Moines put their own spin on the unknown results. Pete Buttigieg addressed about 2000 supporters in a Drake University gym.

“So we don’t know all the results, but we know by the time it’s all said and done, Iowa — you have shocked the nation,” Buttigieg said, to cheers.

Buttigieg wasn’t referring to the delayed Caucus results — but was instead making a suggestion about his finish in the caucuses.

“By all indications, we are going onto New Hampshire victorious,” Buttigieg said.

“The Iowa Democratic Party is working to get these results, get ’em straight and I want to make sure they’re very careful in their deliberations,” Biden said. 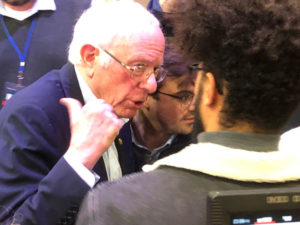 “I imagine, have a strong feeling that at some point the results will be announced,” Sanders said, to cheers, “and when those results are announced, I have a good feeling we’re going to be doing very, very well here in Iowa.”

The Sanders campaign released information shortly after midnight, tallies the campaign itself collected from 40 percent of precincts because of “the failure of the Iowa Democratic Party to release results.”

Elizabeth Warren offered this explanation to her supporters: “It is to close to call — so I am just going to tell you what I do know.”

one of her supporters yelled, “You won!” and the crowd cheered.

Warren began her speech by thanking Iowa and her supporters here.

“You came together, you organized, you showed that we are united in our conviction that hope defeats fear,” Warren said. 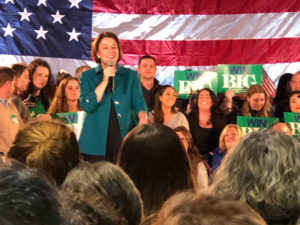 Amy Klobuchar was first to speak once it became clear results would not be released.

“You’ve probably heard we don’t know the results, but I did not want to let another minute go by without thanking all of you,” Klobuchar said. “…We know there are delays, but we know one thing: we are punching above our weight.”

Klobuchar suggested the results — whenever they may be announced — will show she is “on the board.”