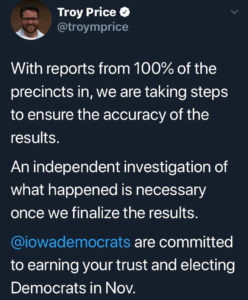 The Iowa Democratic Party’s chairman says an independent investigation is necessary to determine what went wrong with the reporting of Caucus Night results.

Iowa Democratic Party chairman Troy Price said in a tweet that Democrats “are committed to earning your trust.” Price said the independent review would happen after Caucus results are final. The party is giving the campaigns until noon on Monday to ask for a recanvass of the caucus results.

There’s also a deadline of noon on Saturday for campaigns to submit evidence of miscounts in individual precincts. Price said those steps will ensure the accuracy of the results.

A mobile app for reporting precinct results malfunctioned Monday night. Precinct chairs and multiple news outlets have also reported discrepancies in the data after it was compiled manually and released by the party.

Meanwhile, President Trump has tweeted about the two states which kick-off the voting in the presidential nominating season. “Iowa and New Hampshire will not be moved from the Primary Schedule as long as I am President,” Trump tweeted midday day. “Great tradition!”