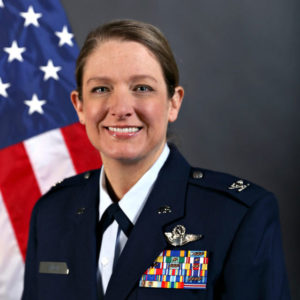 Colonel Sonya Finch was sworn in Saturday to lead the largest of four groups that comprise the 185th. Colonel Finch has spent her entire military career in the Iowa National Guard since joining at age 17. She says giving back to the community was one of two reasons she joined the Iowa Guard.

“I always wanted to fly, and at some point I started to realize that, to fly I really wanted to let the military help me with that,” Finch explains. The support services group she oversees does a lot of things to help 85th complete its mission of flying their refueling missions around the world.

“The security forces, the contracting, it’s the engineers, the supply, the services, how we feed people, how we serve people, all the logistics of that. Paying people, personnel, and then of course environmental management, we’ve got firefighters on base,” Finch says, “everything that it takes for a base to support the ability to fly a tanker.”

Finch has more than 2,000 hours flying experience including more than 500 combat hours. She had her inaugural membership in the 185th as a KC-135 pilot during the mid-2000’s and has been working in current operations at the 132nd Wing in Des Moines.

“It’s been a little over six years since I’ve been here, so coming back and finding faces and finding people that I’ve know for years — it’s really nice to be able to have those contacts and to be able to come back,” Finch says.
Colonel Finch takes over for Colonel Stephany Samenus, who has been promoted to Vice Commander of the 185th.