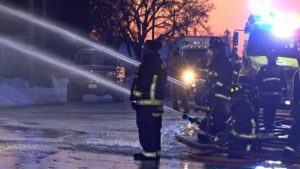 Firefighters on the scene in Waukon. (KCRG TV photo)

Residents of the northeast Iowa town of Waukon are now without a popular restaurant after a fire destroyed it Monday.

Gus and Tony’s Pizza and Steakhouse burned throughout the day. Waukon resident and former city council member Rod Peterson told KCRG TV, it’s not easy to see. “It hurts because, in every small town, it’s just hard on everything,” Peterson said.

Fire Chief Dave Martin said that two children, their mother, and one pet were rescued by an onlooker from the apartment next door to the restaurant. Peterson said this has happened before in the downtown area. “We had a big fire years ago — down here there used to be a big mill,” Peterson says. “Everything burned down in another fire, but it’s just part of what happens. It’s never easy.”

Gus and Tony’s has been a family restaurant in town for 39 years. So while this particular loss is a shock for Waukon, Peterson tells KCRG TV the tiny town is strong enough to handle it. “We’ll survive. We always do. That’s what Iowans do,” Peterson says.

The cause of the fire is not yet known.