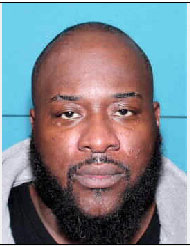 Investigators are searching for a man they believe shot and killed two women late Monday in a Waterloo apartment.

Waterloo police have issued arrest warrants for 36-year-old Matthew Buford III, charging him with two counts of first-degree murder. Buford is accused of fatally shooting his girlfriend, 42-year-old Tamica Allison, and her cousin, 41-year-old Andrea Anderson, both of Waterloo.

Police found the bodies of the two women when they dispatched to Buford’s apartment at 1112 West 2nd Street shortly before 11:30 p.m. to investigate a report of a suspicious incident. Investigators believe the two women died of gunshot wounds, but autopsies have been scheduled.

Waterloo police consider Buford to be armed and dangerous, and possibly suicidal. Authorities are asking anyone with information on his whereabouts to call Waterloo police at 319-291-4340 or Cedar Valley Crime Stoppers at 855-300-TIPS (8477).