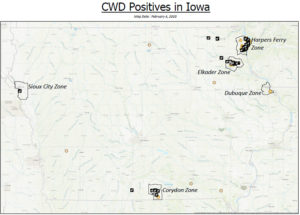 The number of wild deer testing positive for Chronic Wasting Disease (CWD) in the season that just ended dramatically increased.

DNR spokesman, Mick Klemesrud, says they get samples from hunters throughout the season to test. “Seven-thousand samples were collected and submitted — and form that we had 43 new positives this year — bringing our grand total since we had our first positive to 89,” Klemesrud says.

“We’ve confirmed them for the first time in wild deer in four new counties — and that’s Woodbury, Winnekshiek, Fayette and Decatur,” according to Klemesrud. “So, we’ll be reaching out to our local hunters and people who hunt that area and setting up some meeting in early spring and talk about what that means to them, and how we want to go about trying to slow this disease.” CWD attacks the brain of the deer and is always fatal.

Klemesrud says the DNR will continue its effort to slow CWD. “It’s in every state around us, we are hoping we see some advances in science to help us battle this. And so we are trying to work with our hunters to maintain in these areas where we have Chronic Wasting Disease, we like to see our numbers towards the lower end of our goal. This is a deer-to-deer transmission issue,” he says.

Klemesrud says it is something they want to try and slow down.  “It’s definitely a concern. We’re hoping that if we can go as slow as we can and keep the spread down, hopefully, science will catch up and give us some answers here,” Klemesrud says.

It is not believed that humans can contract CWD by eating venison; however, the Center for Disease Control and Prevention recommends, when hunting in areas with CWD that hunters strongly consider having the deer tested they eat the meat.

The DNR provides a way to check on CWD tests on their website.