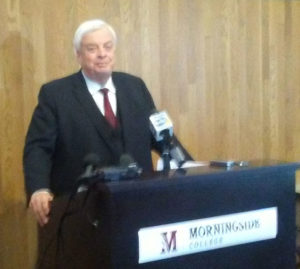 Morningside College President John Reynders has announced he’ll retire in the summer of 2021 — after a record 22 years at the helm of the Sioux City school. Reynders and his wife will move to Florida.

“We love Sioux City. I’ve never lived anywhere, nor has Robin, that we have felt is more home than Sioux City, Iowa,” Reynders said. “…But I’ve got to give the next president space.”

Reynders just led a $70 million fundraising campaign for the school and is launching a new effort to raise even more over the next seven to 10 years.

“So the commitment for the next president isn’t just a year or two — it’s a seven-to-ten year commitment. My goodness, I wish I was 45 because I’d want this challenge in the worst way,” Reynders said, laughing, “but I’m not.”

When Reynders arrived in Sioux City in 1999, Morningside facilities were outdated, enrollment was dropping and the college had been operating in the red. With 15 months left in the job, Reynders plans to keep raising money for the college.

“There’s the last piece to this remarkable transformation of the physical space of the campus, which involves creating an entrance off of Morningside Avenue…that I would love to see happen,” he said.

About 2000 full-time students are enrolled at Morningside today. Its board of directors will immediately begin searching for a new president and the board hopes to announce Reynders’ successor early next year. Morningside College was founded in 1894 and is affiliated with the United Methodist Church.