You are here: Home / News / Subzero weather expected to move out for the weekend 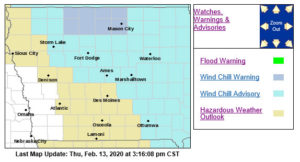 The overnight blast of cold weather brought us back to reality that it’s still very much winter in Iowa.

National Weather Service meteorologist Brooke Hagenhoff says there was a big drop — but she didn’t see any record lows.
“Not that I know of for actual temperatures. We had areas hitting minus 18 at Estherville, we had minus 14 at Fort Dodge, at the airport in Des Moines it got to minus ten,” Hagenhoff says.

The heavy winds made things worse by creating dangerous windchills. “Minus 40’s minus 30s’ across the state. Estherville hit minus 47, minus 41 in Mason City. And then into Des Moines we got minus 35 and minus 31 at Ottumwa,” she says.

The extreme cold led to sun dogs appearing in the sky– including one that could be prominently seen behind the State Capital Building. “Those generally occur whenever you are really cold, so you can get instead of liquid drops in the atmosphere you get ice crystals because it’s so cold,” according to Hagenhoff. “And based on the shape of the crystals and the sun angle, you can get the sun dog to form there. Just because of the really cold air that we get that type of reflection that we don’t typically get.”

Things are expected to start warming up for Friday and Hagenhoff says we are starting on the downside of colder temperatures overall. “The good news I suppose is that it (temperature) generally starts to increase during this month — at least slightly — and from there it’s only going to increase as we head into March,” Hagenhoff says. In the short term — she says we could see temperatures in the 40’s this weekend.