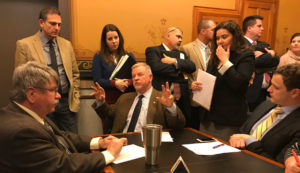 A small group of Iowa House members and hunting enthusiasts are debating whether to increase the number of licenses for out-of-state deer hunters.

Under current law, 6,000 deer hunting licenses are available for residents of other states. Representative Dean Fisher, a Republican from Montour, says expanding deer hunting opportunities would be good for Iowa’s economy.

“As a landowner, I’ve got deer — including big bucks — running through my barnyard all the time and where I live, it’s just overpopulated,” Fisher says. “Instead of just keeping the number the same, adding to the licenses is what I would favor.”

Fisher is on a House subcommittee that’s embracing the idea of offering 1,500 more deer hunting licenses to out-of-staters — and setting aside 500 of those licenses for hunters who’ve signed up with an Iowa-based hunting guide. The Iowa Bow Hunters Association opposes the move.

“What we have in Iowa is unique. It’s known worldwide when you talk about white-tailed deer, the quality of the herd that is managed by the DNR and enjoyed by the residents of Iowa is second-to-none. We’re all for maintaining that same similar kind of structure,” says Iowa Bow Hunters Association president Bob Haney. “We also understand people want to come here. There’s a reason they want to come here. They don’t enjoy what we have in their home states.”

Eric Goranson, a lobbyist for the Iowa Bow Hunters Association, says Iowa hunters should be the priority and it’s getting harder and harder for Iowans who live in urban areas to find places to hunt.

“If we don’t take care of them and give them access and keep them in mind during these conversations, our conversations 10-12 years from now are going to be very different,” Goranson says. “It’s going to be: ‘How do we get hunting back in Iowa again?'”

Jim Obradovich, a lobbyist for the Iowa Conservation Alliance, says other hunting-related proposals under consideration could complicate the system even more.

“You look at it like one of those Jenga games and you can periodically pull one or two of those pieces out, but sometimes you pull the wrong piece out and the whole thing collapses,” Obradovich says.

There’s a deadline this week for all of these kinds of policy discussions. Most bills must be endorsed by a House or Senate committee by this Friday to stay eligible for consideration.