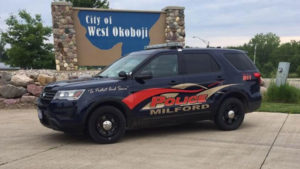 The call came from an elderly man around 2:50 a.m. He told the responding officers Keaton Verner and Garth Wolff that he was lonely and wanted someone to talk to. The two officers pulled up chairs and said they would keep him company. The department posted a picture of the man and officers on Facebook — but then said it was taken down out of respect for the man’s privacy.

The post says community policing is key to law enforcement having a good relationship with the citizens. The post encourages everyone to go out in their communities and pay it forward.