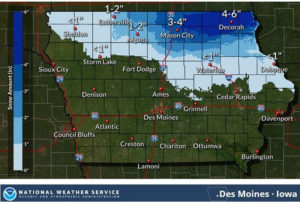 As spring approaches, forecasters say Iowa’s in for some rollercoaster temperatures.

While many of us enjoyed high temps in the mid-40s over the weekend, it’s back to winter today with ice, sleet, and snow.

Meteorologist Kenny Podrazik, at the National Weather Service in metro Des Moines, says the northern few tiers of counties will see rain change over to snow this morning and this afternoon.

“Anywhere from Algona, Estherville, Mason City, even as far east as Decorah, that whole area is going to see a decent amount of snow,” Podrazik says, “and there’s certainly the potential for a light glaze of ice as well.” Parts of the region could get up to a half-foot of new flakes. “Estherville and Algona could see one-to-two inches of snow,” Podrazik says. “The further east you go, you could see higher amounts, like 2-to-4 in Mason City, and northeast portions of Iowa could see 3-to-6 or 4-to-6 inches of snowfall by later today.”

Twenty-five counties across Iowa’s northern third are under a Winter Weather Advisory and where ice is accumulating, driving will quickly become hazardous. The forecast calls for a big dip into colder weather this week and another significant warm-up by the weekend.

“We could see some subzero temperatures Wednesday night into Thursday morning,” Podrazik says. “Then, by Saturday and Sunday, we’ll be back into the mid- or upper-40s and certainly couldn’t rule out a couple of spots topping 50 degrees on one of those days.”

Spring will arrive in a little over a month on March 19th.