You are here: Home / News / Some Iowa school districts using propane to power their buses 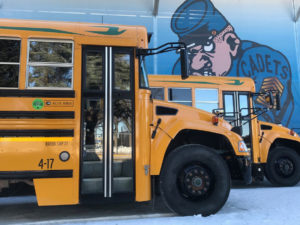 The Howard-Winneshiek School District has buses that run on propane.

The federal emissions settlement with Volkswagen is providing nearly $5 million that schools districts can apply for to replace diesel buses and to cut air emissions.

The Iowa Propane Gas Association is lobbying districts to try propane buses over electric or new diesel engines. Association president Deb Grooms says they’ve already seen some district make the switch. She says during the first round of the funding, they had 19 schools and school districts receive grants of almost $1.5 million dollars to replace 56 diesel buses with propane. Grooms say the propane buses are cleaner and cost less.

“A propane school bus costs three to four times less than an electric school bus. And the simple math means that Iowa can achieve three to four times the removal of older dirtier diesel buses,” Grooms says. Grooms says the diesel buses run quieter. Propane is used by some to heat their homes and is also key in drying down crops in wet years. There were issues with getting enough supply in for the harvest this year — but Grooms says schools that run propane buses didn’t have an issue.

She says she didn’t hear of any issues with school districts as a lot of them contract ahead of time to have the propane tanks filled. Grooms says there are now 249 school buses running on propane, and they are hoping to see many more as the next round of the Volkswagen settlement funds are awarded.

Propane buses are now in use in the Lake Mills, Linn-Mar, North Scott, Cedar Rapids and Howard-Winnishiek school districts