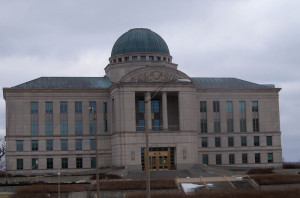 The Iowa Court of Appeals has upheld a district court ruling dismissing a lawsuit seeking to undo changes to the state’s judicial nominating system that Governor Kim Reynolds signed into law last year.

The Appeals Court ruling says the group of Democratic lawmakers argued they were surprised by what was in the bill — while the court says the surprise was the timing of the introduction of the bill — not the failure to adequately disclose its content.
They ruled the lawmakers had no standing to challenge the law because they were not sufficiently affected by it.

Governor Reynolds was asked today about the ruling. “Of course I am happy with the ruling — I think that it was appropriate,” according to Reynolds. “I want to say with the new system, I think it’s working really well.”

The bill was introduced on the last day of the 2019 legislative session. It gives the governor authority to name another member to the 17-member commission that nominates candidates for openings on the Iowa Supreme Court and Court of Appeals.

Reynolds praised that commission. “They’ve done a great job of sending me great selections. So, I believe that it’s working and it’s doing well and I agree with the ruling,” Reynolds says.