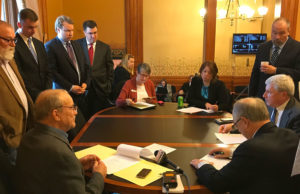 A bill that would prohibit Iowa cities from annexing most farmland has cleared initial review in the Iowa House, but bill backers say it needs major adjustments and is unlikely to meet Friday’s deadline for committee action.

Kevin Kuhle, a lobbyist for the Iowa Farm Bureau lobbyist, called the bill the starting point for an important conversation.

“Our folks have some concerns regarding the annexation process,” he said during a House subcommittee hearing Monday.

The bill deals with voluntary and involuntary annexation. That means it would prevent farmers who want the land to be annexed as they plan to sell it for development.

“The sad fact of it is that our cities have always been surrounded by farmland,” says Gary Grant, a lobbyist for the City of Cedar Rapids, “and sort of putting this permanent ring around cities seems to be something that I think might have unintended consequences.”

“I”m not against expansion or development,” he said during the subcommittee meeting, “but there’s only a finite number of flat, black dirt farmground in Iowa.”

“They can’t put all those new houses out in a swamp, you know, so you’re going to have to have some decent land, anyway, to build houses on,” Gasman told reporters after the meeting.

According to the Iowa State University Extension Services, nearly four percent of prime Iowa farmland was taken out of production in the 35 year period between 1977 and 2012.